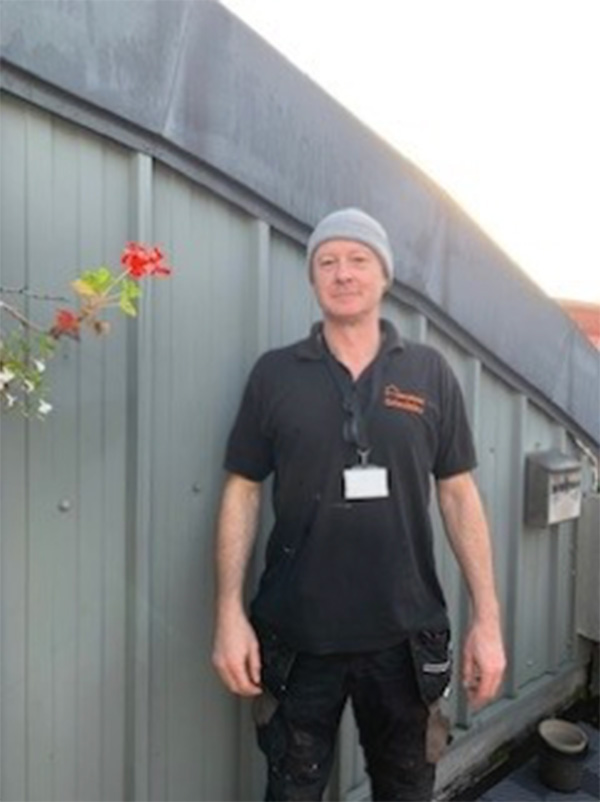 I had always been a heavy drinker in my life, but it had never caused me any real issues. I was living with my father, who was diagnosed with cancer, which was about 10 years ago now. Sadly, he died because of it.

I had to watch him go through all of that, it was a really hard time, and I turned to drink to cope.  My drinking became a real problem. I withdrew from everything, from everyone.

I still went to work at first, the bills were being paid, but I was drinking heavily and it was a real issue that I just couldn’t face.

The drinking gradually caught up with me, by then I had stopped paying the rent, and got behind with everything and had lots of debt. I was blinded by my own thoughts and feelings.

I lost the flat because of my rent arrears,

Suddenly I’m homeless, I didn’t know what to do, or who to turn to. I’d never been in this situation before I was quite alone and very scared.

I was fortunate that my elder brother sort of picked up that something was not going right, with his support and his wife they helped me get in contact with outreach who help people who are homeless and sleeping rough on the streets. I was lucky to have their help.

I had a brief interview with them gave them some details and they managed to get me into the night shelter on SWEP at O’Hanlon House. Which is where you get somewhere to sleep at night so you’re not out in the cold in the winter, and then sit up where they provided you somewhere to stay at night.

Being on the streets was really horrible. Staying on the streets is scary and horrible, it’s not nice for anyone. Homeless Oxfordshire gave me a support worker, I was given a room in one of the projects called pre-recovery. I moved in there I got my own room it was fantastic! It’s great to have my own space my own room and privacy after having nothing. It was still quite scary at first, being in a house with six other strangers and trying to cope with things again.

I was in pre-recovery for about six months once you get used to it you settle down and it’s quite nice and that. It’s so much better than being on the streets! One decision I did make when I first moved in was that I needed to stop drinking. That’s one of the best decisions I’ve ever made in my life.

I couldn’t control the drinking and I knew I had to stop! There is no way I could continue the way I was. I did stop drinking because I was given access by Homeless Oxfordshire to a programme to help me with my addiction issue. Having proved that I wasn’t drinking anymore and that I wanted to change things while I was there, I got offered a place for a dry house called the Sapling project. Here, life was a lot more stable than I was used to because in the other place people were often still using substances to manage the trauma in their lives.

I stayed at Sapling for just over 18 months.

I was able to take on a volunteer role whilst still working to overcome on my addiction. I had quite a nice structure to my life. One of the best things was that I used my time to get my driving licence back, and then was able to progress to getting my housing application in.

Getting on the housing list was tough because of my rent arrears from before, it took a long time to be accepted.

Throughout all of this Homeless Oxfordshire was a constant offering a place to stay whilst I worked really hard to improve my life. I proved that I was able to pay off my debts and was able to get onto the housing register.

Obviously with COVID things were taking longer than normal fortunately I was very very patient. I was able to get a part-time job with the maintenance department at Homeless Oxfordshire which was a milestone for me and a great step to getting full-time work.

Out of the blue, I got a phone call from the housing officer saying there was a flat available. I was over the moon, I wasn’t expecting it but at long last, the flat was there. I viewed it, I signed it and I moved in January this year.

I now have a full-time job, my own little flat, and a car. I love my work, I love the people I work with I’ve made lots of friends over the last three years. It’s been an interesting journey obviously highs and lows a lot more highs than lows. It has been a struggle at times but I’m here now. I’m happy with everything I’ve done and everything has been worthwhile. My perseverance has paid off and well that’s my journey over the last three years from homelessness to where I am now and as they say the rest is history……

A final word from Nigel

Homeless Oxfordshire has helped me not just with my housing issues but supported me throughout with my alcohol addiction, giving advice on who to see and financial support with benefits, grants etc.

I was able to get a part-time job with the maintenance department at Homeless Oxfordshire which was a milestone for me and a great step to getting full-time work.

Undoubtedly they have been the backbone of my journey over the last 3 years so I am very thankful to not just the support staff but all the many people I’ve met on the way.